Puppy Hasn’t Pooped: How Long Can They Go?

In this post, we’ll answer your puppy pooping questions, including when they don’t poop after eating, when they haven’t pooped in a day, more than a day, and how long your puppy can go without pooping. Plus, we’ll tell you how to resolve this puppy pooping situation!

Should you be worried if your puppy hasn’t pooped?

It’s not uncommon for a puppy that is new to a house to not poop for up to 48-hours. This is due to nervousness, anxiety, and becoming familiar with new surroundings. If your puppy hasn’t pooped in more than 48-hours, you should take them to your veterinarian.

A puppy should poop 3 to 4 times a day. This usually corresponds to defecating roughly 30-minutes after eating.

A major consideration is puppies aren’t one size fits all. Some puppies will follow the above routine down to a T, however, your puppy might like a big morning poop, and then hold it until after dinner time, or some other toileting routine that suits them.

If you’re more concerned that your puppy is just taking their time when it comes to pooping, and you’ve got better things to do than stand around for 30-minutes waiting for them to poop, you might want to read our post: Puppy Takes a Long Time to Poop.

How long can a puppy go without pooping?

If a puppy hasn’t pooped in more than 48 to 72-hours, it’s worthy of concern. After this period of time, the dried fecal matter can get stuck in the colon (known as obstipation). It could also be caused by an obstruction or another medical issue that requires investigation.

Some things to consider if your puppy hasn’t pooped in 48 to 72-hours include:

If you recognize these behaviors in your puppy then you should take them to the vet. Your puppy may have an underlying problem, rather than mild constipation.

Does your puppy have any of the below symptoms?

If so, then you should immediately take them to the veterinarian as this could be a medical emergency.

Are you interested in reading our post, Is pet insurance worth it? 5 shocking facts you need to know…

Possible more serious conditions can include the following: 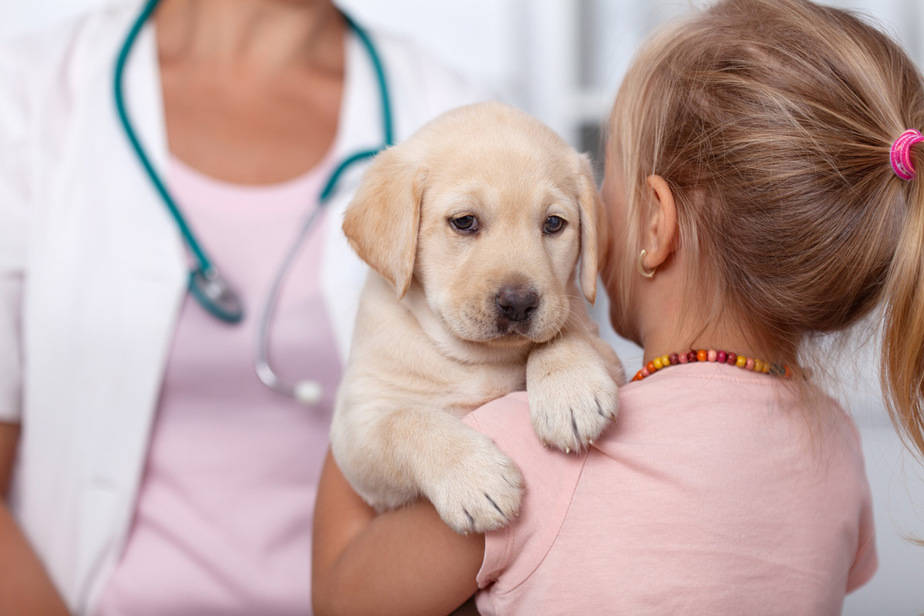 However, if your puppy is showing all the below symptoms, then they are likely mildly constipated, and you can use some home remedies to fix their issue:

If your puppy is pooping in the house, but not outside, then be sure to read our post: Puppy won’t poop outside: Here’s what to do

Puppy not pooping after eating

A puppy will not always poop after eating. After a puppy adjusts to a new environment, it’s likely they will poop 3 to 4 times per day, and after eating will be the most likely time they will defecate. However, puppies can have their own routine.

As a puppy will not always poop after eating, be sure to watch carefully for your puppy’s signs of wanting to go poop. These pre-pooping signals include:

These signs don’t always occur in the 20 to 30 minute period after eating their meal, so be on the lookout and offer plenty of chances for them to go outside to poop.

Keep a journal on your puppy’s pooping routine. You might see they are more likely to go at certain times of the day.

A puppy will be more likely to poop first thing in the morning, and so if they do, they may not require a poop after breakfast.

It’s always ideal to get your puppy to poop after dinner and before bedtime to have them sleep through the night as much as possible (although at least one toilet outing is likely when they are young).

If your puppy is reluctant to poop after eating dinner, try feeding them 2-hours before bed. Give them an hour to digest, and then take them outside for poop time.

This rule of pooping after eating will also vary as a puppy matures, as their GI tract will mature also and so their toileting patterns will likely change.

It’s also possible the food you’re giving your puppy is causing constipation. We recommend Pet Plate for any pup’s who are having difficulty with their diet. The meals are Vet designed, the food is higher quality, and the portions are given to you to suit your pup.

Why your puppy doesn’t poop after eating

It’s possible that your puppy has learned not to poop after eating. When you take your puppy outside to poop, be sure not to mix poop time with playtime.

Use a leash to take your puppy outside for pooping. When they go, celebrate their effort with pets and treats. Then return inside.

When it’s time for a play, take them outside without a leash. You can even do this directly after returning from pooping.

The important thing is not to remove your puppy from something they’re enjoying directly post poop. This will teach your puppy that pooping means the fun is over. Which means you’ll be waiting hours on end until your puppy will do their business, because they know they don’t leave until the poop is done! 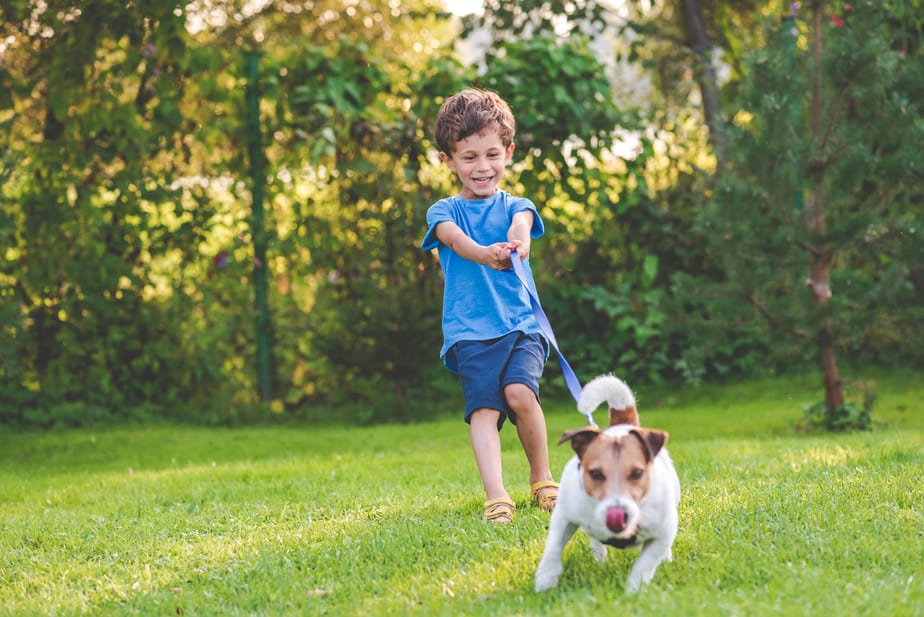 It’s a good idea to implement a voice command into your puppy’s pooping routine. It may take a month or so, but it’s definitely worth it in the long run.

Be sure that everyone who takes puppy out for a poop, waits for them to poop, and then excitedly says the keyword you’ve all decided upon.

For instance, when your puppy poops, become animated and excitedly say, “Poop! Poop! Good Poop!” and give lots of treats.

After doing this for some time, your puppy will associate pooping, the word “poop”, and rewards.

In the near future you can now start saying, “Poop! Poop!” and your puppy will try and poop in order to get their rewards.

When your puppy hasn’t pooped in a day

A puppy that hasn’t pooped in 24-hours is not a concern unless there are signs of a more serious issue, such as crying, attempting to poop but can’t, abdominal pain, or vomiting. Otherwise, it’s likely the puppy is transitioning to a new environment.

Puppy hasn’t pooped in more than one day

A puppy that hasn’t pooped in more than 48 to 72-hours will likely need to see a veterinarian. After this time period, complications can arise such as stuck fecal matter. Owners can try giving their puppy canned pumpkin with their meals, which can loosen the stool.

Puppy not pooping before bed

A puppy that isn’t pooping before bed could benefit from eating dinner two hours prior to bedtime. Owners should also use a leash for taking their puppy out to poop, and not confuse this time with playtime. A teaspoon of canned pumpkin in their dinner may also assist in going before bed.

How to resolve puppy constipation One of the most well-known remedies for a puppy not pooping is to give them canned pumpkin. This can be a food topper for a constipated puppy, or to give by itself as a way to get a puppy wanting to use their bowels.

If your puppy is holding their poop for over 24-hours, you might want to visit the grocery store and pick up some baby pumpkin food.

Another option is to add a small amount of coconut oil to your puppy’s kibble. Not only can this help with making them poop, but it’s also good for the skin and coat.

One of the most important ways to keep your puppy pooping, and in good health for that matter, is to be sure to feed a high-quality diet.

Quality food is vital not only for development but a low-quality food with bulking agents and grains can cause constipation, and over a period of time, can be detrimental to their health.

We recommend Pet Plate, who offer a personalized meal plan using fresh food, cooked in a human-grade kitchen. Here is a 30% off coupon to get you started.

You can also try over-the-counter Metamucil and add some into one of their daily meals.

If your puppy has a more serious pooping problem, then they may require an enema for evacuation of the stool, a prescription stool softener, or a medication. If your puppy is dehydrated a veterinarian can also offer fluid therapy for rehydration.

If you have tried some of the above and are still finding issues with your puppy not pooping, then it’s best to investigate further with your puppy’s vet.

They will likely do bloodwork, abdominal x-rays, an ultrasound, or other investigations.

If your puppy is only a few weeks old and isn’t pooping, then be sure to watch the video below to show you how to stimulate their bowels.

Although we don’t recommend the following, I thought we would share it as sometimes drastic measures must be taken for a stubborn puppy.

Get two paper matches and put the sulfur tips briefly into your mouth to wet them.

Straddle your puppy to have a good view of their bottom.

Pulling the tail out of the way, insert the now wet sulfur tips into the pup’s anus. No, I’m not joking. Again, not entirely recommended!

Now release your puppy. They will be so keen to get them out of their bottom they will squat and push to remove the matches.

If there’s poop at the door, out it will come. If they managed to remove the matches easily, you can try again with two more, but don’t go beyond that.

OK, I now feel like I’ve shared a dirty secret.